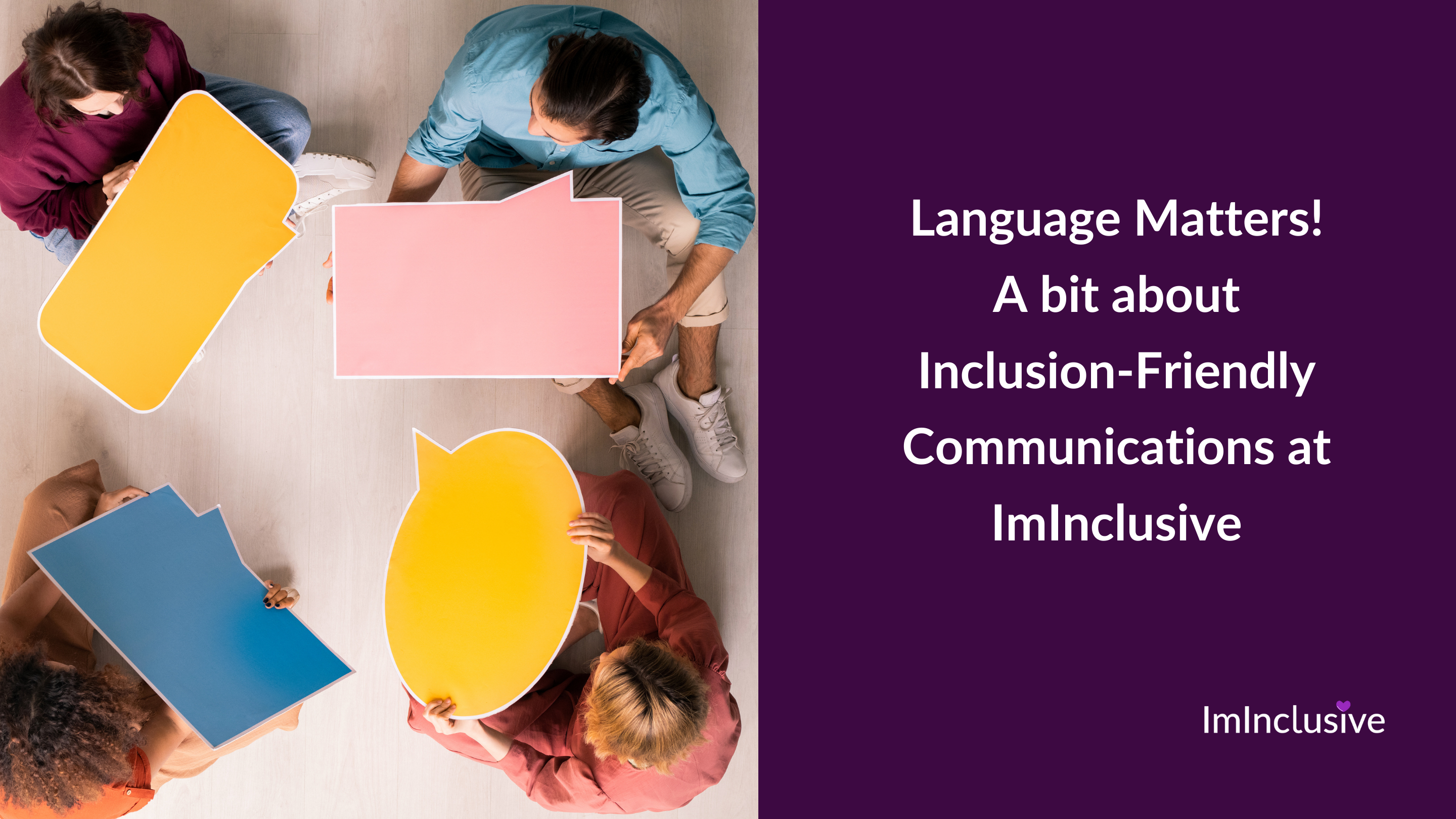 At ImInclusive, we have researched, studied, practiced, and utilized a practical language guide in our day-to-day communication; we also share the resource with our team members and communities to learn the methodology behind our use of inclusion-friendly language.

The definition set out in the UN Convention on the Rights of Persons with Disabilities (UNCRPD) aims to set a global standard.

The Convention protects all persons with disabilities, defined in Article 1 as including "… those who have long-term physical, mental, intellectual or sensory impairments which in interaction with various barriers may hinder their full and effective participation in society on an equal basis with others."

The Social Model of Disability: ImInclusive's Way of Comprehending the World and Removing barriers

It is most important to ask each individual their preferred language; some people with disabilities may choose to use Identity First Language. Others may prefer we recognize them with People First Language.

Person-first language is widely encouraged in many contexts as a way to avoid defining a person solely by their disability, condition, or physical difference. However, not everyone prefers it. Some people instead prefer identity-first language as a way of emphasizing what they consider an important part of their identity.

The person-first language introduces a person before any description of them. Examples include a person with a disability or a child who has cerebral palsy. Person-first language is intended to emphasize the fullness of a person and to avoid defining them exclusively by their disability or condition. Identity-first language involves stating a descriptor of a person first, as in an autistic person and a blind child. This is often done with the idea that the characteristic in question is an integral part of a person’s identity and community membership and should be emphasized rather than minimized.

Person-first language is preferred and encouraged in many contexts, especially in medical care. However, some people prefer identity-first language—notably many blind, deaf, and autistic people. Still, preferences around such approaches vary widely, even among people within the same community. The best approach is always to respect people’s choices about the language they use for themselves.

Remember that in many cases, it’s not relevant or necessary to discuss or point out a person’s disability at all. Regardless of what language preferences people have, every person wants to be treated as just that—a person (which is one of the motivating ideas behind person-first language). However, that doesn’t mean that disability is inherently negative, unmentionable, or something that must be politely ignored (which are some of the notions that identity-first language pushes back on)."

The Term "People of Determination" in the UAE

In 2017, a region-wide press release shared by the government titled, "Dubai - Sheikh Mohammed said that people with disabilities will be called "people of determination" from now on." was circulated. As per Khaleej Times, "His Highness Sheikh Mohammed bin Rashid Al Maktoum, the Vice-President and Prime Minister of the UAE and Ruler of Dubai, has launched a National Strategy for Empowering People with Disabilities during a visit to the Ministry of Community Development.

Sheikh Maktoum bin Mohammed bin Rashid Al Maktoum, Deputy Ruler of Dubai, also attended the visit that included the establishment of an advisory board for people with disabilities.

"Disability is in fact the inability to make progress and achievements. The achievements that people of determination have made in various spheres over the past years are proof that determination and strong will can do the impossible and encourage people to counter challenges and difficult circumstances while firmly achieving their goals," Sheikh Mohammed said."

Terms Differ by Country: An Example of Pakistan's Progress

Each country may also have a preferred language; for example, in Saudi Arabia, people are recognized as "people with disability," and the case may be different in other nations. While a consolidated guide on terms used in each country can be published, these are usually ever-evolving.

For example, most recently, in 2020, national media distributed an announcement on behalf of the Supreme Court of Pakistan. The Supreme Court directed the Centre and provincial governments to stop using the words such as “disabled,” “physically handicapped,” and "mentally retarded" for official correspondence, directives, notifications, and circulars as they violate a person's dignity.

Therefore, we must research, read the news and update ourselves on the best-suited term when visiting a new country or, most notably: ask each individual.

The list of terms in each local language that has had a demeaning effect on people with disabilities is exhaustive. However, in the English Language, we are avoiding the below terms as best practice:

ImInclusive was born in Abu Dhabi, UAE, and therefore, uses the local term "People of Determination." and the preferred language of an individual, whether identity-first or people-first language. We have also learned with time to check from local communities on the select language in a country. Our teams internally and in our capacity-building trainings encourage asking each individual's personal preference.

To summarize, there is a golden rule in practicing inclusion-friendly language,

On behalf of the team at ImInclusive